How clean are Electric Cars? 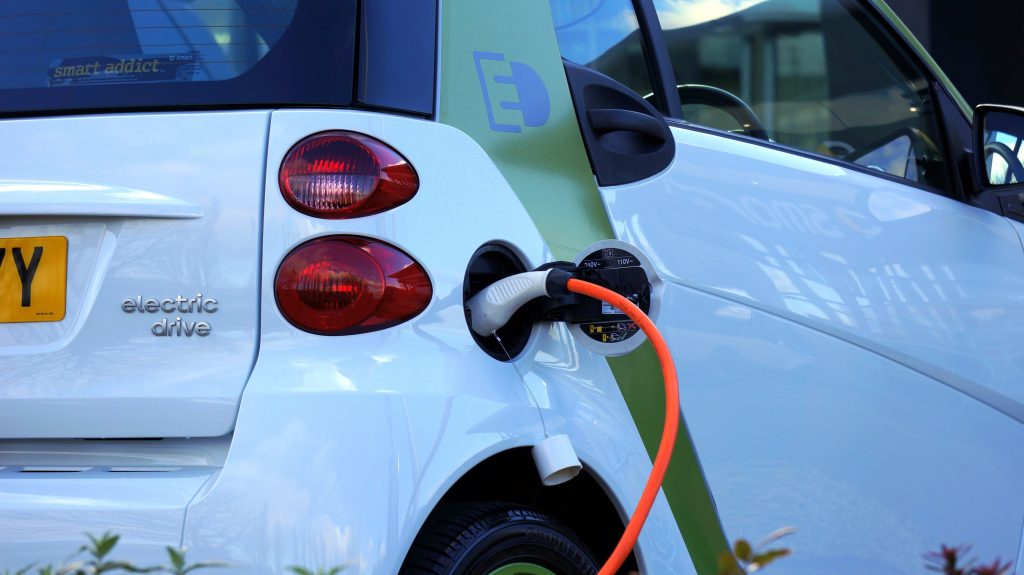 This question is one that I have been trying to answer since I bought an EV in 2011.  My last answer was in 2015 where I produced this table based on data from the Greenhouse gases, Regulated Emissions, and Energy use in Technologies (GREET) Model.

This table showed that an EV running on wind or solar is 87% cleaner than an average ICEV.  However, the reference links shown in that table are no longer working, so I wanted to update the table with current information.

Using the current GREET spreadsheets, I now come up with the table below.  (data accessed 6-11-21)

The result is the same as in 2015!–i.e. 87% GHG reduction from an EV compared to an ICEV.  Calculation:  the US light duty fleet is about 1/2 passenger vehicles and 1/2 SUVs and Pick-up trucks (https://afdc.energy.gov/data/10306).  Using 89% reduction as the average for SUVs and Pick-up trucks (from the table), and averaging that with 84% reduction for passenger cars–this gives an average GHG reduction of an EV running on solar, wind, & water electricity compared to an ICEV of 87%.

Units are grams per mile.

Note 1:  If production of an EV results in 31g/mi more emissions than an ICEV (EV with US mix = 81 g/mi minus ICEV with US mix = 50g/mi), and the vehicle lasts 130,000 miles (GREET’s assumption)–  this suggests that the EV emits 31 g x 130,000 miles = 4.0 million grams extra during production.  By saving 332 g/mi in operation this would take about 12 thousand miles to recover the extra emissions from production (4 million grams/332 g/mi)– a little less than one year of typical driving to make up for the extra emissions from manufacture.

Note 2:   The GREET tables did not give this figure–3 g/mi for average of emissions from construction of solar panels, wind turbines, and hydro), but I used other publications from Argonne Labs to make this calculation.   See this document for further details.

Are we there yet?

This is great, but is it enough?

Here is a picture of an average US household’s GHG emissions: (Cool climate calculator) 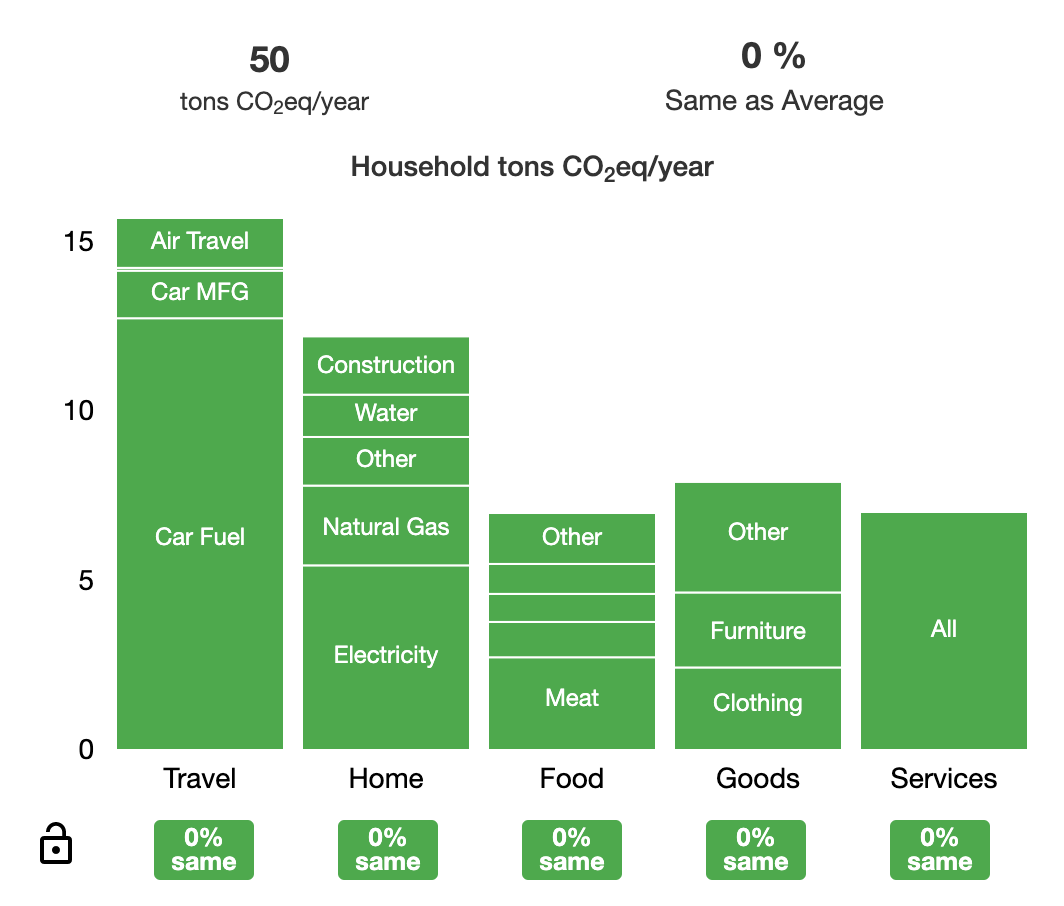 If we reduce our car fuel and car manufacturing by 87%, that would save about 12 tons of GHGs per year.  If car manufacturing operates with 100% renewable energy and uses mostly recycled materials, that  would cut another 1 ton.

Here are some additional reductions that should be achievable:

All of these actions result in a total reduction of 30tons, leaving 20 tons of GHG emissions per household.  If  the household has 3 people, that is about 7 tons per person.

If we look at a more sustainable lifestyle model, we can get a more optimistic picture.  Below is an estimate of average emissions for a fairly high density zip code in Berkeley, CA. You’ll notice that emissions from fuel consumption in Berkeley is about 5 tons per household compared to 13 tons for the average US household.  This is because Berkeley is a very walkable, bikeable, transit friendly place compared to typical lower density US cities.   In Berkeley the average tons per capita fall from 50 to 28. 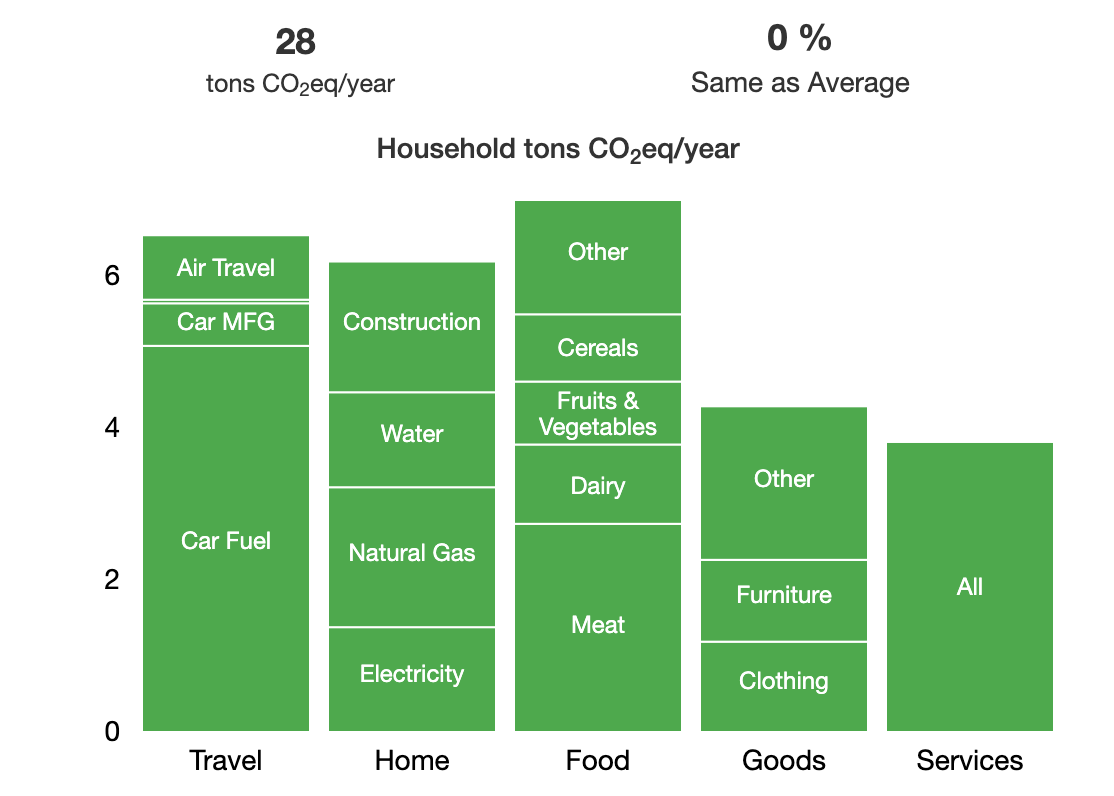 Now if we add the deductions as before:

There are some categories that appear largely outside of our personal control–water, construction, services.  But we can pay attention to:

Of course taking personal action is good, but pushing for strong governmental regulations is even more important.  For example, many governments are planning the phase out of the sale of gas cars–e.g. Norway is scheduled for 2025; California is scheduled for 2035.  The sooner this is done, the better it will be for the planet, which is already overheated, with terrible consequences, which are growing even greater as we delay.  In addition to phasing out the sale of gas cars, we can work for:

If we closely monitor our GHG emissions  and work together to build sustainable communities, we can be part of the solution to the climate crisis.

It is clear from the science and the math that electric cars need to replace gas cars (ICEVs) asap.

A note on extraction of lithium and other components of batteries.

Extraction of any mineral is controversial.  In the case of lithium there are at least two ways to extract it:  one of them–open pit mining–has major environmental impacts; the other–extraction from brine– does not.

The proposal to dig up 25 square miles of Nevada for an open pit lithium mine is an example of the first method.  This project rushed through an environmental impact report that was approved in the last days of the Trump administration.  This method of open pit mining is currently cheaper than the brine method, but if it were required to employ cleaner methods of operation and to remediate the site after it’s done, that may not be the case.

The Salton Sea in California is an example of brine extraction.  The process will still take energy and water, so it is not without impact, but it is a lot cleaner than open pit mining.

Extraction of cobalt is even more controversial, with child labor in the Congo, the main source of cobalt, being well documented.  Production of batteries with less or even no cobalt is one approach to this problem.  Also, Tesla has announced that it will not use cobalt from the Congo.  And international pressure for human rights in the Congo is another important strategy.

But it is important to remember that human rights abuses also abound in fossil fuel extraction, on a much larger scale than these mineral extractions.  And, in the case of fossil fuels, when ten gallons of crude oil is extracted and refined, it is burned in a gas tank in a week.  Then the process starts all over.  In the case of lithium, about 20 pounds goes into a car’s batteries and then lasts 15 years, and can be recycled at that time.

And every gallon of gas produces 19 pounds of CO2 when it is combusted, and it emits another 5 pounds to refine it.  This CO2 is destroying the climate that civilization is based on.  And air pollution from fossil fuels kills millions of people every year.  Lithium and cobalt have no such impacts.

So, yes, we do need to extract lithium, cobalt, and other components of batteries in the cleanest way possible, but we should not equate those problems with the catastrophic impacts of fossil fuel extraction.