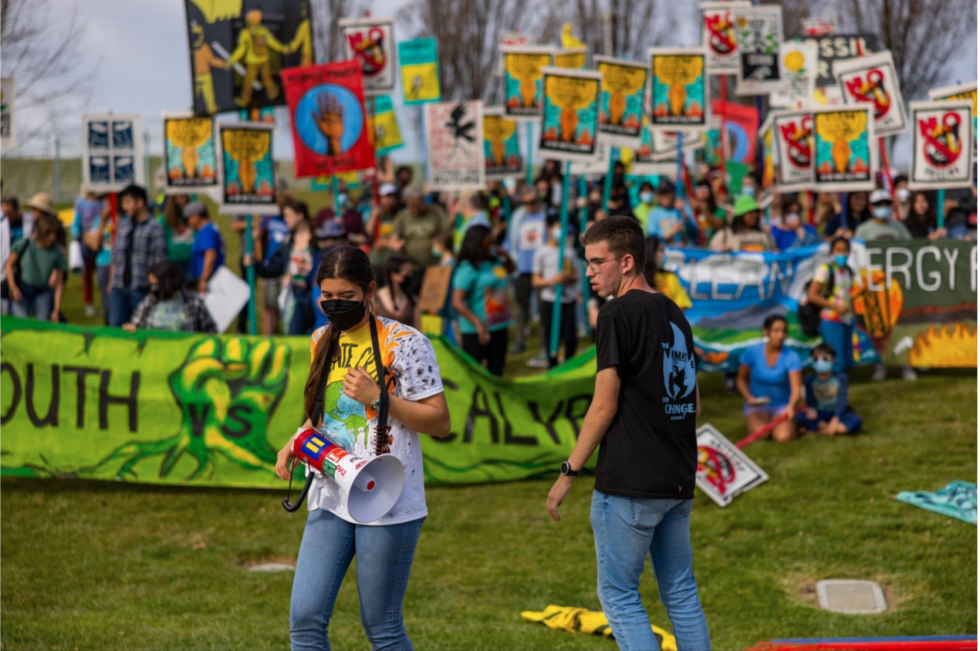 CONTRA COSTA COUNTY, California (Earth Anecdotes) – Youth activist Greta Thunberg has transformed awareness about the climate crisis all around the world. Now, in a parallel effort, youth leaders in Brentwood, Contra Costa County are fighting against oil and gas drilling right here in California. Brentwood resident and senior at Heritage High School, Alexi Lindeman, has made this the current focus of her life. In an interview with the author, she relayed a message to local oil man Bob Nunn, reminding him that drilling “is harmful to our health, it’s harmful to our economy, it’s harmful to residents as their houses are sinking. You have these sites very close to homes, schools, and even a hospital.” As I listened to her speak, the passion in her voice was evident.

Nunn is hoping to begin drilling adjacent to Antioch in unincorporated county land, but the impact of the drilling process will be felt across the city border. Alexi is demanding that Contra Costa County change its General Plan regarding drilling restrictions and setbacks. To achieve this goal, Alexi led a rally on March 12, 2022, from 1-3pm at the Antioch Community Center to raise awareness in the community. Alexi was joined by demonstrators and journalists.

“I think this gives people a chance to not only go out to a protest or rally but to take a stand for their community, which is going to be directly impacted.”

Sunset Exploration is defending its profitability while the Antioch community is defending its quality of life. As Alexi is up against a big company, the odds may be against her. However, given Alexi’s determination, it would be a mistake to dismiss her outright. And the region’s history also bodes well for her. After all, Alameda County successfully banned all fracking in 2016. The county also revoked conditional use permits for operating wells which ended drilling in 2018, and no drilling has been allowed since then. In addition, Alexi may have support from real estate developers. The Ranch is a new home development project near Sand Creek and Deer Valley Road. In 2020, the project was approved by Antioch for the second time. The Ranch’s developers will certainly oppose drilling, as it will decrease the value of the properties.

Since Alexi began her campaign, the Antioch Council voted 5-0 to ban new oil and gas drilling in the city. However, new drilling is still legal in unincorporated areas. Many locals, concerned about their health, don’t think the Antioch ban is good enough.

According to Stanford researchers, everyone within 2.5 miles of oil and gas wells suffers health effects from leaks. Methane vents have been installed in Brentwood, disguised among lampposts. There are currently 75 vents inside Brentwood homes. When people buy houses, they sign lengthy documents that don’t clearly disclose that the house contains methane vents.

In addition to damage to human health, drilling takes a large toll on the environment, including air quality and water pollution.

Aware of these issues, Alexi’s plan is realistic and targeted. While her stated objective is to prevent drilling in all of Contra Costa, her fallback goal is a drilling setback of at least 2.5 miles from populated areas.

Bob Nunn, the owner and CEO of Sunset Exploration will not be happy with any restrictions. His company owns 24 wells in unincorporated Brentwood and has been drilling since 1980. He has two current projects in the area. The first project, active since 2018, is focused near Deer Valley Road, one mile south of Antioch. The closest house is only 900 feet away. The second project, initiated in May of 2019 in partnership with PowerDrive Oil & Gas Co, applied for a permit for exploratory drilling in the Brentwood area. Together, the sites are within 2.5 miles of two hospitals, 15 public schools, and 18,000 homes.

California has experienced drilling disasters in the past and Alexi is worried that this project is a risk of a repeat. “Considering how close these drilling sites are to homes, hospitals, and schools it would be dangerous if there was an explosion, spill, leakage, or hazard of any type. I already know there is a small leak. It hasn’t been confirmed on the news but somewhere privately. The air quality is much worse. It’s in close proximity to highly populated areas, which poses a serious safety hazard.”

Alexi sees this as the moment to act. When the EIR for PowerDrive and the updated General Plan is released (estimated on May 11th, 2022), there will be opportunity for public commentary. In the meantime, Alexi has words for the public she hopes they will listen to carefully:

“To voters: this is your future. If you’re worried about gas and oil prices, the small amount of drilling is like a drop in the bucket. Our health is more important and the better thing to do is to focus on other energy types because we know we can’t rely on this one.”

Alexi may be young, but, like Greta Thunberg, her words and focus are strong. Depending on how concerned citizens continue to respond, she may prove a match for Bob Nunn.