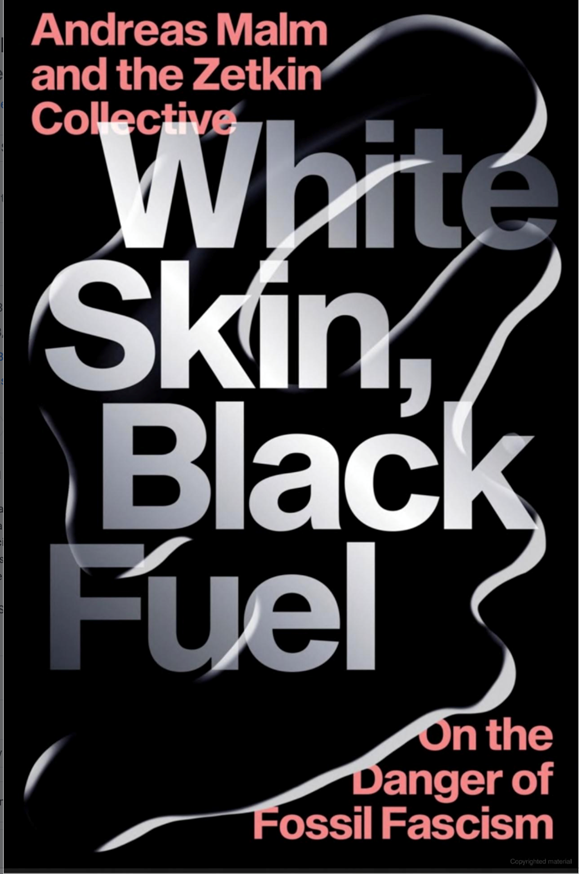 White Skin, Black Fuel – On the Danger of Fossil Fascism

By: Andreas Malm and the Zetkin Collective. Published December, 2020

This is a very eye-opening book.  As a person who has been accustomed to thinking that social democracy in northern Europe is a fairly successful economic model, one that provides a safety net for workers and progressive responses to the climate crisis, the book shines a sobering spotlight on powerful and growing ultra- right white nationalists in Europe, and their close affinity to MAGA.

Malm describes how fascism in the 1920s, both in Germany and Italy, broke with the 19th Century right wing by embracing and glorifying the achievements of fossil fuel driven capitalism–mass production of cars, airplanes, ever more powerful bombs and rockets, – all based on black fuel.

The two consistent political positions of fascists today are anti-immigration and climate denial.  Most of the fascists, like Trump or Bolsonaro or the leaders of Poland, Hungary, and Italy, favor outright denial that climate change even exists, but some take a position that it is not caused by humans, and/or that it is not really a problem.  A fourth position is to accept science on climate, but then continue to behave schizophrenically as if it doesn’t exist–e.g. Norway, which Malm describes as setting “world records in hypocrisy.”  A fifth position is to say that climate change exists, but go on to say that it is caused by immigrants; the solution is to close the borders to (non-white) immigrants–green nationalism.

Malm stresses that there seems to be no limit to how irrational the climate deniers claims can be.  For example, one argument is that CO2 is good for us.  He replies that “one could just as well tell someone who is about to be drowned in a flood that they need water to live.” (One of many LOL comments by Malm.)

One insight is that the fascists manage to see themselves as persecuted, as we see privileged white men in the U.S. imagine that they are victims.  Malm says, “Even the richest billionaires seem able to believe that they are persecuted by governments taxing their wealth.”  He says, “The suggestion of ecological limits is a narcissistic injury of the first order.”

A common trait of fascists is to appeal to a mythical past where the nation was unified–e.g. Make America Great Again.  Seeing everything through an ultranationalist perspective, the fascists naturally reject global solutions, even voluntary ones such as the Paris climate accord of 2015.

Malm makes Donald Trump’s Islamophobic, anti-immigrant, white supremacist, and climate denialist politics very clear in context. In fact, the book shows that, far from being “fitful” and “wobbling”, Trump was laser focused on helping fossil fuels in every way possible.  Malm states, “From early 2017 onwards, the most intransigent, rabidly denialist wing of primitive fossil capital governed in the US. . .”  He refers to “primitive fossil capital” as the fossil fuel companies themselves, as distinct from “fossil capital” such as automakers or utilities that rely on and ally with the fossil fuel companies.

Malm argues that fascists come to power only with “the willingness of sections of the dominant class to call on the fascists.”  I.e. the fossil fuel companies and their allies who face an existential threat.

A key takeaway is that Malm makes the case that the fascists assuage people’s despair at not seeing a solution to the climate crisis by telling people not to worry, the whole thing is a hoax.  Malm says that fascism feeds on “a sense of overwhelming crisis beyond the reach of any traditional solutions.”  The fascists fill a void if progressives do not show how the future can be brighter without fossil fuels.  The climate movement needs to present clear, realistic solutions to the crisis.

One scary reality that Malm talks about is the way that social democratic parties have adopted the same anti-immigrant policies proposed by the fascists in all of Europe.  This is similar to the way the Obama was called the “deporter-in-chief” because of his aggressive implementation of anti-immigration laws.  Malm points out that in 1990 15 countries had walls on their borders, but in 2016 70 did and more were being planned.  He notes that “for anti-immigrant sentiment, Sweden topped the European League,” a statement which foreshadowed the inclusion of the fascist party of Sweden in the new conservative government elected in 2022.

Anti-immigrant hysteria is especially scary because it is clear that climate disruption will lead to many more migrants, such as those who fled Syria in 2015 due to a protracted drought, and those who have been fleeing Central America for the same reason.  The climate movement needs to develop a thoughtful and humane policy towards immigrants and refugees that can stave off the xenophobia of the right.

The book ties the climate crisis to racism.  The slogan “Whites fly/Blacks die” captures the issue of who has caused the problem–especially high income people in the United States and other developed countries.  Since much of the suffering due to climate change is in tropical countries, the long history of white supremacy and colonialism leads people in Europe and the U.S. to be indifferent to the suffering in Africa, Asia, and Latin America.  This is parallel to the indifference in the US toward communities living near sources of pollution such the case of a housing project in Rodeo, California located next to a refinery.  If the impacts were hitting the global north the same way they are hitting the global south, perhaps there would be more urgency.

I think the greatest weakness of the book is its failure to make it clear that a fossil free future is both possible and better for humanity and all living things.  Perhaps this is just assumed, but out of a 540 page book, it seems that a few paragraphs to make this point would have been worthwhile.  He does hint at it when he says, “A modest fraction of the trillions of dollars in corona packages would have sufficed to initiate a transition consistent with a 1.5° pathway.”

Malm correctly points out that the world has made virtually no progress in curtailing GHG emissions.  He says, “Not one of them (all the capitalist countries) has initiated the liquidation of primitive fossil capital.”  The same is true in California, which remains a major oil producer and gasoline refiner in spite of 15 years of climate regulations.  And the global production of fossil fuels has expanded  even more in 2022 as the Ukraine invasion has led to more fossil fuel drilling and digging.

Malm also makes a case that fascists are wedded to the power and machismo of fossil fuels and the cars, trucks, planes, etc that they power. I agree that there is some truth there, but Malm doesn’t mention that electric vehicles actually have better acceleration than fossil fuel vehicles.  Bus drivers, truck drivers and motorists–once they try an EV–quickly become fans.  EV sales in Europe and California are now at 20% and growing fast.  Malm doesn’t discuss the disruption of the fossil fuel companies by this superior technology.  And since 80% of oil goes to gasoline for cars, this is an existential threat to the oil companies.

An analysis of the balance of forces would also have been helpful.  Clearly there are many people–in the U.S. progressive Democrats like Bernie Sanders, AOC, and Barbara Lee who are fighting to end the fossil fuel era.  There are also wavering forces like President Biden and California Governor Newsom who have taken some good actions, but need to be pushed.  And there are conservative Democrats like Joe Manchin and Krysten Sinema who have stood in the way of action.  And of course, the whole Republican Party is in the pocket of “primitive fossil capital” to use Malm’s expression.

In the U.S. the balance of forces is still in favor of primitive fossil capital, but the forces to overthrow that power are growing.  This closing power gap is in fact one of the main reasons that fossil fuel money is flowing to fascists, i.e. an act of desperation given that they know they can’t win fair and free elections.

We are at a pivotal point.  Fossil fascism is growing as the only option for the fossil fuel companies.  Multi-racial democracy and a green new deal stand as an alternative and a beacon of hope for a better world.  The fascists can only deliver climate chaos.  Building a climate movement in solidarity with labor and racial and environmental justice groups is the way forward to tip the scales in this battle.

PS–I recommend the Kindle or online version of the book–both because it has an extensive list of endnotes with links and because, at least for me, I could take advantage of the online dictionary since Malm’s vocabulary includes a lot of words I didn’t know.