The Air District Board adopted our goal on November 6, 2013. Staff have begun to develop an implementation plan. We are tracking progress and offering proposals. We’re also organizing teams of constituents to reach out to their BAAQMD Board members and win their ongoing support for decisive action. Eventually it will be up to the Board to pass regulations requiring deep emission cuts.

The San Francisco Bay Area is equivalent to a wealthy small nation in terms of population, the level of GHG emissions and the size of it’s economy. Our region emits 100 millions tons per year of GHGs. This is equivalent to the emissions of nations such as Sweden, Israel, Ireland and Portugal. 80% below 1990 emissions would be 17.6 million tons per year.

The primary cause of global warming is the burning of fossil fuels. The Bay Area’s biggest export is refined product from the five oil refineries located in Contra Costa and Solano counties. Not only are we emitting GHGs at the level of a small developed nation, we are also exporting emissions around the globe, including refinery products exported to China that would be illegal to burn in California.

State law gives California’s 35 air districts, including BAAQMD, primary responsibility for control of air pollution, including greenhouse gases (GHGs) from virtually all non-vehicular sources. Plus, air districts are authorized to set stricter standards than those established by either California or the federal government. About 60% of Bay Area GHG emissions are non-vehicular.

California’s Global Warming Solutions Act (AB 32) aims to reduce GHGs to 1990 levels by 2020. It’s a start, but not nearly enough. Federal action is stalled out, or even going backwards by encouraging more drilling. BAAQMD, covering the nine county Bay Area, has the power to take action where State and federal government efforts fall short. 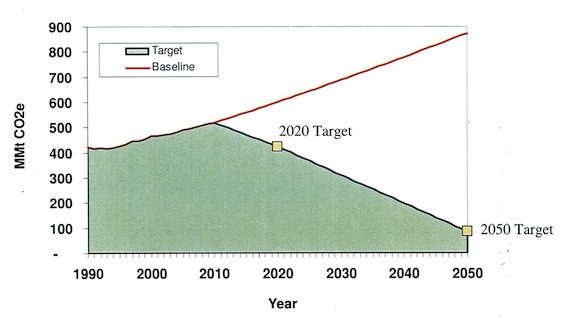 Diagram from From “The Technology Path to Deep Greenhouse Gas Emissions Cuts by 2050: The Pivotal Role of Electricity” Science 6 January 2012

In reality, California is “meeting” the 2020 climate pollution reduction target through measures such as allowing refineries to get emission reduction “credits” by buying forests in places like Michigan. That means that by 2020, Bay Area Climate pollution will be nowhere near 1990 levels. The BayCAP campaign aims to REALLY reduce Bay Area carbon and methane pollution emissions. Curbing greenhouse gases will also curb other air pollutants and benefit the health and well being of Bay Area residents. Buying forests in Michigan will not do that.

Scientists tell us that to avoid catastrophic warming the average rise in global temperature must be kept below 2 °C (3.6 °F). To keep warming below 2 °C we need extremely deep reductions in all GHGs but especially carbon dioxide (CO2). Conservative scientific consensus has concluded that to keep warming under 2 °C, we need to reduce annual worldwide GHG emissions to 80% below 1990 levels by 2050.

When signing AB 32 into law in 2006, Governor Schwarzenegger recognized this by also signing Executive Order S-3-05 setting a 2050 target to reduce GHG emissions 80% below 1990 levels. However, seven years later California still has no legislation enacting this necessary goal.

President Obama’s recent climate action support is a most welcome development, but the measures he has laid out are less ambitious than those California already has in place. Neither federal plans nor California’s measures will achieve the deep reductions we need to protect our climate from catastrophic warming. Solid comprehensive action must start somewhere, to demonstrate it’s doable.

We need to do our fair share to protect the world’s climate.

BAAQMD has the statutory authority to take meaningful action. We want to work together as a community to step up to the challenge.

The Air District Board adopted a 10-Point Climate Action Work Plan on April 2, 2014. Read it here.

View Large Calendar
We are glad to feature other free events for climate and environmental justice in the Bay Area! Email us at info@350bayarea.org to get your event posted on our calendar.

Building Momentum for a Green Future