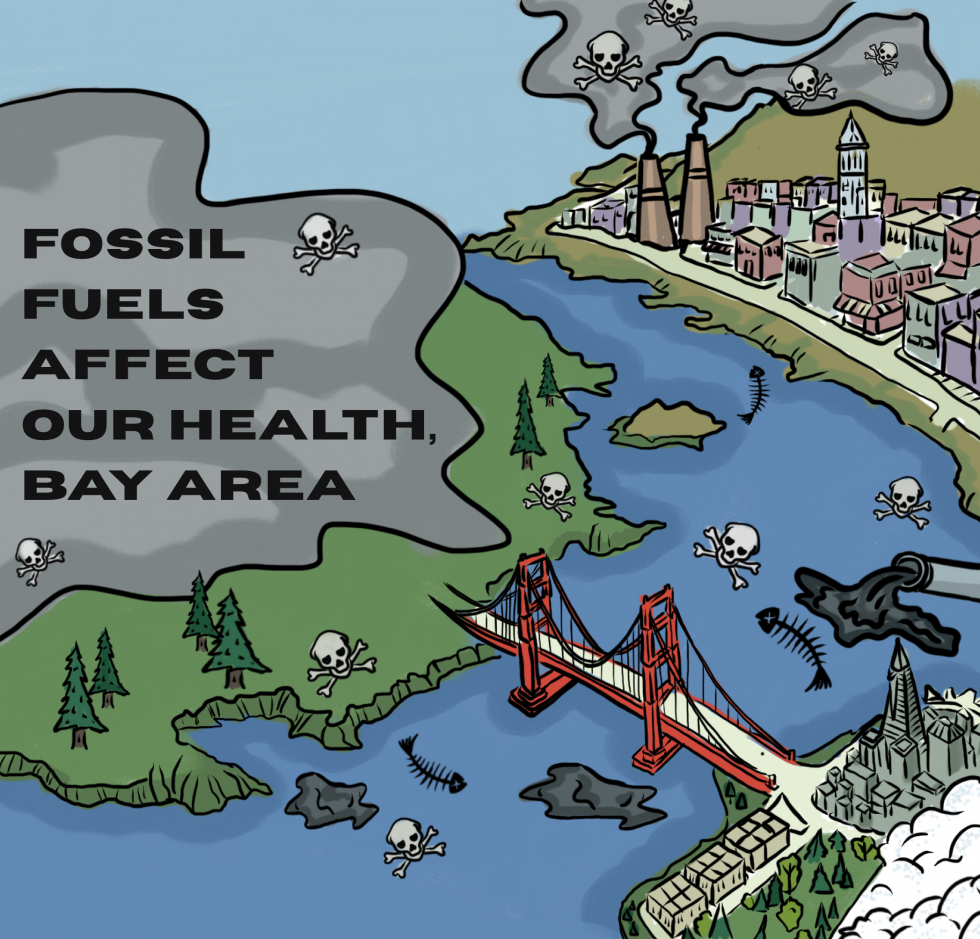 Anyone who was in the Bay Area on September 9, 2020 will forever remember the day it never got light and the sky was shrouded in a smokey dark orange haze. On that day,14,000 firefighters were battling devastating wildfires across the state. Even if you were not one of the thousands who had to evacuate or whose home burned down, you could not help breathing in the very tiny particles that enter the lungs, in spite of being locked inside your home. For those of us who live in the Bay Area, fossil fuels are causing a double whammy, harming us in two significant ways:

We are no longer simply projecting future impacts, fossil fuels are killing us today—directly by polluting our air, water and soil, and indirectly by changing our climate patterns. The World Health Organization recognizes climate change as one of the major health challenges of the 21st century.

A new more ferocious breed of wildfires is becoming more frightening in California.  In 2020 fires scorched massive areas in eight of the nine Bay Area counties (Sonoma, Napa, San Mateo, Alameda, Contra Costa, Solano, Marin, and Santa Cruz) causing deaths, loss of homes, and evacuations for thousands of residents. At the time this blog is being written, unprecedented winter wildfires are raging in Santa Cruz and San Mateo counties. The Fourth National Climate Assessment reported that areas burned by wildfires have gone up from two million acres in the 1980s to over ten million acres in recent years. In addition to those who were injured and killed in the fires of 2020, every Bay Area resident breathed in the microscopically fine particulate matter, PM 2.5, which is linked to asthma, and other respiratory diseases, heart disease, Alzheimer’s, cancer. adverse maternal and infant health and other severe health conditions. Wildfires also bring mental health trauma; in addition to those whose lives and livelihoods were directly impacted, many of us experienced increased anxiety levels from being on guard for extended periods, witnessing the suffering of our neighbors, and worrying about the lack of clean air.

Extreme heat and record-breaking temperatures are also becoming more common across the Bay Area, our nation and our planet. In 2017, heat waves killed at least fourteen Bay Area residents and hundreds more were hospitalized. Excessive heat raises levels of ozone and other air pollutants contributing to deaths from cardiovascular and respiratory diseases and dehydration, especially among senior citizens. Our health and well-being stands to be further endangered as increased temperatures in the Sierra lead to massive snowpack loss, putting the Bay Area water supply in jeopardy and straining the agricultural production in the Central Valley, which provides food to the region. Each year Bay Area temperatures break prior records.

Indeed, fossil fuels damage our health at every stage, polluting our air, water and soil in the Bay Area. The East Bay, an industrial hub for the fossil fuel industry, has five refineries along the bay and the delta. Bay Area refineries release nitrates, methanol, MTBE, ammonia, zinc, nickel and other toxins into the air and waters of the SF Bay. Residents of communities near refineries have significantly higher rates of Non-Hodgkin lymphoma and respiratory diseases. Recent flaring at the Richmond Chevron Plant in 2021 is currently under investigation. In 2016, flaring spewed more than 500 pounds of dangerous sulfur dioxide which also adversely affects our respiratory systems. PM 2.5 released by refineries, storage, transport and wildfires leads to 2,500 Bay Area deaths annually and is correlated to lower life expectancy. It has also been found to increase the COVID-19 death rate.  PM 2.5 has no safe exposure level.

The health repercussions from climate change in the Bay Area are not evenly distributed.Climate Central reported “The people of Richmond live within a ring of five major oil refineries, three chemical companies, eight Superfund sites, dozens of other toxic waste sites, highways, two rail yards, ports and marine terminals where tankers dock.” In Richmond more than 80% are people of color and the median income below the state average. Richmond’s children have twice the rate of asthma as their neighbors across Contra Costa county. Low income families and communities of color are disproportionately impacted as many live in unsafe neighborhoods and lack access to adequate healthcare, healthy food, water, transportation and clean air.

Continuing and new health threats result from coal and petroleum coke (petcoke) dust released during storage and transport. A campaign by environmental activists, city progressives, public health experts and community residents led to a Richmond City Council ordinance that mandates the phasing out of coal and petcoke by the Levin-Richmond Terminal over a three-year period.  However, industry officials have promised lawsuits to challenge it. In Oakland, the city and community have been working to stop construction of  a massive coal terminal at the foot of the Bay Bridge that is being planned for international transport. New threats to our health also come from proposed oil drilling in Brentwood and the Trump administration’s approval of fracking on 750,500 acres in the Bay Area and on the Central Coast. Environmental and community activists are vigilantly fighting these continuing and new threats to our health.

We can take a stand to stop the health impacts from fossil fuels in the Bay Area. We can work to ensure the eerie dark day we witnessed on September 9, 2020 does not become the new normal. Let your voice be heard, contact elected officials and join other Bay Area residents working to stop fossil fuels from killing us and our planet.